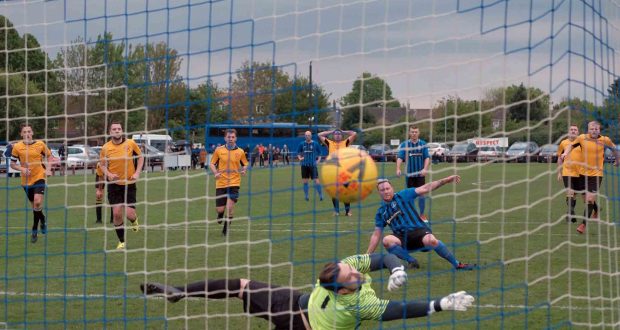 Moulton Harrox’s hopes of completing a ChromaSport PDFL double were dashed on Saturday night as they lost an exciting Peterborough Senior Cup final with Whittlesey Athletic 4-3.

Moulton, who hadn’t played since their final league game of the season some three weeks prior, showed no sign of rustiness as Declan Earth set up Tom Panton to fire home the opener on 17 minutes.

The lead lasted just 11 minutes as Aaron Dunmore netted a leveller after Jamie Robinson palmed out a free-kick from veteran Ricky Hailstone.

Kev Nottingham’s Harrox were back ahead just before the interval when Earth netted a typical finish – and could have gone 3-1 up had Marcus Parry not rattled the bar early in the second period.

However, the game turned just before the hour when Coddington handled in the box, conceding a penalty and receiving his second yellow card in the process.

Carter duly netted from the spot to level matters, before then putting Whittlesey ahead for the first time with a second penalty moments later.

Not done there, Carter completed a eight-minute hat-trick when he headed home Ollie Long’s corner (63) to open up a crucial two-goal cushion.

Harrox refused to give up and smashed the post through Panton before Danny Maddison slotted home a 90th-minute penalty.

But there was to be no late leveller, leaving Whittlesey to celebrate.