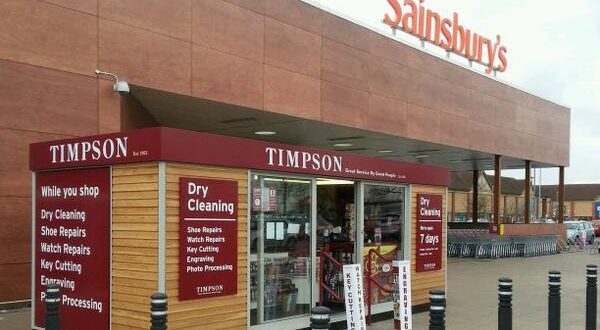 A Timpson pod at a Sainsbury’s store near Bristol. (photo: @JamesTCobbler)

Councillors have refused planning permission for an unpopular new ‘pod’ for Timpson at Spalding’s Sainsbury’s, branding it a “carbuncle”.

A 16-name petition and a further 23 objections were received on the application to South Holland District council, with retailers fearing it would detrimentally impact on the town centre.

Coun Chris Brewis said Springfields outlet development had already left the town centre on “life support”.
Of the Timpson development, he said: “It won’t kill it stone dead but it will be one more nail in the coffin of what used to be a really attractive market town.”

The pod was proposed to be placed beside the foyer of Sainsbury’s Holland Market store, in front of the Wilko entrance, providing a dry cleaning drop-off point, shoe repairs, watch repairs, key cutting and engraving.
Councillors unanimously refused the proposal, objecting to the design of the building and fearing the impact of pedestrian safety with part of the well-used path taken up by it.

The decision, at a meeting last Wednesday (January 4) was in opposition to planning officers’ recommendation to grant permission.

A report before councillors said: “The location of the pod is not expected to reduce pedestrian safety.
“The National Planning Policy Framework 2012 promotes positive, competitive town centre environments as this supports viability and vitality.
“Similar pods have been sited around supermarkets throughout the country and is now an established retail presence.”

Coun Bryan Alcock branded the pod design “highly unattractive” and a “carbuncle”.
He said: “We should be using our best endeavours to keep the town centre viable.
“This will lessen the viability of the town centre but it can be refused on aesthetic grounds and further congestion.”

Coun Christine Lawton said: “This is a pod in the wrong place.
“I would welcome Timpson into the town – they are a retailer with a social conscience. Were it within Sainsbury’s I would welcome it wholeheartedly.”

A Sainsbury’s spokesman said: “We are obviously disappointed with the decision to refuse planning permission and will now be reviewing our options.”