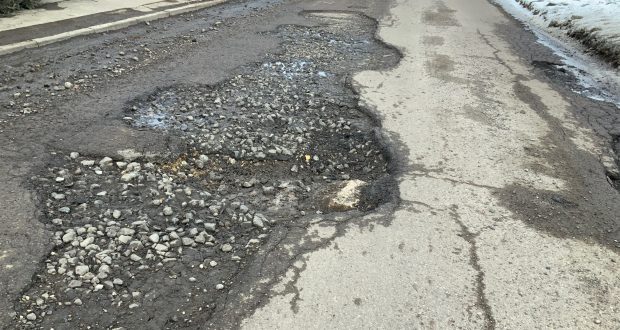 Calls have been made for more funding to improve South Holland’s roads amid a number of reports of potholes and sinking roads.

Particularly badly hit seems to be Moulton with Station Road, Broad Lane and Long Lane all being affected.

Coun Anthony Casson, called the condition of Broad Lane “about the worst and the most dangerous bit of road I have ever seen”.

“Two people have damaged their cars today and will be contacting the county council to claim,” he said. “I am sure there are others that I don’t know about.

“It has been reported several times.

“The road is not safe and when it is full of rain water it makes it Impossible for people to realise the damage that is on the road.”

Meanwhile residents on Station Road have had to contact the police after neighbours witnessed articulated lorries driving over their gardens to get round the road closure signs that were put up.

One neighbour, who wished to remain anonymous, was also annoyed that Lincolnshire County Council had listed the street as ‘fixed’ on the FixMyStreet website when closing the road last week.

A council spokesman said that work had started on fixing the road on Monday and that further fencing had been arranged to dissuade motorists.

“When the crew attended the sink hole to repair it, they started to investigate it and it became apparent it extended further than initially thought, and they weren’t able to fix it then and there,” he said. “To keep the public safe whilst the more substantial work could be organised, an emergency road closure was put in place.”

Other issues reported to The Voice include part of the A151 at Pode Hole which has been subject to temporary traffic lights for a number of weeks and Boston Road South in Holbeach where there’s evidence of the road subsiding for a third time in recent years.

Cheryl Carter, of Spalding, contacted us after getting a £175 bill when her car hit a pothole on West Marsh Road in the town.

Lincolnshire County Council has pledged an extra £10m towards road upkeep in its budget for the 2021/22 financial year.

Coun Richard Davies, executive member for highways at Lincolnshire County Council, said: “The very wet and then very cold weather we have had will cause potholes to form more quickly on the roads.

“Please keep letting us know about them through FixMyStreet and we’ll get them repaired as soon as we can.

“The council hates potholes just as much as drivers do, and every month we fix thousands of them on our network, as well as redressing and resurfacing roads to stop them forming in the first place.”