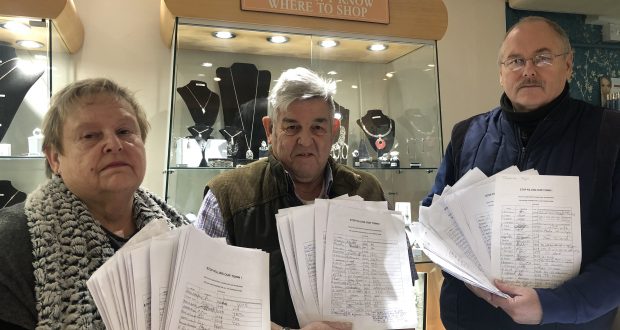 Sue and Barry Stubley and Steve Mason (right) are pictured with the signatures they’ve collected.

Call for a re-think over parking fees

A host of town traders say they have collected around 1,500 signatures against the recent rise in car parking charges amid concerns of how it will effect their businesses.

Sue and Barry Stubley, of Occasions jewellers in Market Place, say they amount of signatures they’ve collected shows the strength of feeling about the proposed increases as listed on page 29 of this week’s issue of The Voice.

They and other traders have already had a partial success in that the proposed charge of a ticket to stay more than four hours will instead be £3 rather than £5, up from the previous charge of £1.50.

But Sue says the charges should remain as they are or be free for all motorists to attract more people into the town and into the business she gave up her previous career to start 13 years ago because of her love of jewellery.

“Everybody in the town centre is in uproar about this,” she said. “As the petition is entitled – ‘Stop Killing Our Town’.

“We want people to come to the town and we can’t compete with the likes of Springfields.

“People need to support the town before the shops disappear and we expect the council to do their bit to support it.

“I do this because I love jewellery. I don’t make a huge profit and I haven’t had a holiday in 12 years.

“I love it and I love the town. It used to be a thriving town.”

Another backer of the petition is Steve Mason who has run Mason’s Models for 24 years in the New Street property which was formerly Ernest Wilson and Sons.

He said: “The council should be making sure its businesses are thriving.

“They run the town for the local people and they need to take responsibility.”

South Holland District Council say it’s ten years since they increased charges in the town and the increase is needed to maintain the current car parks.

Councillor Roger Gambba-Jones, South Holland District Council Portfolio Holder for Place, said: “These increases are crucial for allowing us to continue investing in better car parking facilities and increased provision for the benefit of everyone who visits the town.

“These issues are highlighted as being more important to drivers than charges in the research carried out.

“Any increases in charges for residents is never taken lightly and this is the first time in ten years that prices have increased, despite the ever-rising costs of provision.

“Our process has involved comparisons with other Lincolnshire councils and the trend in the RPI. However, following discussions with residents and retailers we took the decision to reduce the originally proposed increase for all-day parking to £3 rather than £5.

“Quarterly permits are also still available to purchase, which will cost the equivalent of just £1.77 a day for anyone parking in Spalding five days a week.”