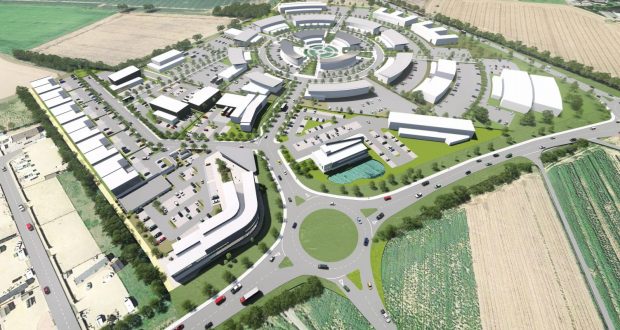 An artist's impression of the Food Enterprise Zone.

Councillors gave the thumbs up to branding Holbeach’s Food Enterprise Zone ‘in the UK’s food valley’ as it was revealed the development will include a hub for start up businesses.

After securing £8.5m of the government’s Getting Building Fund, work on phase two of the project is soon to begin Lincolnshire County Council’s principal officer for regeneration Simon Wright told a meeting of the authority’s Environment and Economy Scrutiny Committee.

He also said that though some prospective tenants had pulled out of taking up units in the current economic climate, others had asked about more space.

Mr Wright said: “Our voids will probably look the same as they did and quite healthy in terms of occupancy.

“Company will lose people but they will be good people with ideas and that’s what we hope the hub can do.

“As technology increases we think the FEZ as a whole will focus on cutting edge technology that will support all the big food producers in South Lincolnshire with robotics and improve the supply lines.

“As we move on from COVID and Brexit this will be well placed to hit the ground running.

“It really is exciting and it’s happening at a fast pace.”

The University of Lincoln’s Centre of Excellence is due for completion early next year while the ‘Hub Centre’ would need to be opened by March 2022 the meeting heard.

Mr Wright said the council wants the Hub to be ‘striking’ due to its location so that it will ‘set the tone’ of the FEZ.

“It will be akin to one of our businesses centres where we’ll be able to offer easy-in and easy-out lease terms to small in-out businesses,” he continued.

“It will give the opportunities for the sector to come out of the current difficulties in the strongest position possible by creating that business space to allow people to grow and develop their small business ideas and support the wider food chain in South Lincolnshire.”

A question was raised on how the project was funded. Mr Wright confirmed it involved match funding as well as a contribution from South Holland District Council but didn’t want to reveal exact totals in a public meeting.

Following an article two weeks ago, the branding of ‘in the UK’s food valley’ was criticised by a number of Voice readers online including one who described it as ‘a hammering to basic geography’.

But councillors raised no concerns when asked if they had any.

Mr Wright said: “It’s important to think of that not just in the Holbeach context which, as you know, is in the middle of The Fens, but it’s setting a more regional context for looking at all the other FEZ, not only in Greater Lincs, but as you go into East Anglia.”