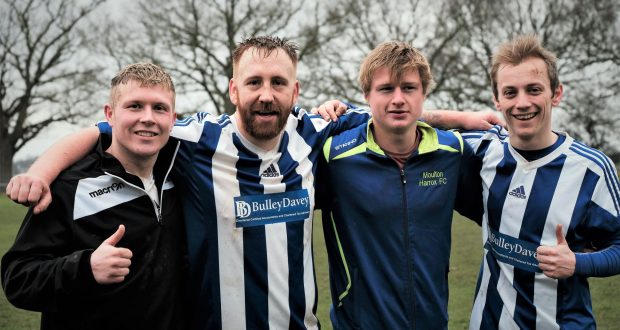 ONE OF THE LADS: Bobby Patterson, second from left, in his playing days. Photo by KEN SMITH

It will come as no surprise to followers of Moulton Harrox that they are targeting the ChromaSport PDFL Premier Division title this season.

The perennial challengers, who haven’t finished outside of the top three since 2014, finally get their season under way at Uppingham Town on Satuday (2pm).

New assistant boss Bobby Patterson, who enjoyed a decorated spell with Harrox as a player, insists that his side will be hunting for silverware again.

He’ll work under manager Kev Nottingham and hopes that his presence in the dressing room will help pull the side together both on and off the field.

“Of course we’ll be chasing the title,” enthused the former defender. “That’s what we always try to do.

“We always aim to be consistent and that has been a big reason for our success over the years.

“Maybe we lost our way a little bit last season, but my job is to bring the lads together on and off the pitch and help generate that team spirit we are well known for.

“It’s obviously been a bit frustrating for us having to wait to start our season, but the pandemic has forced us all to adapt.

“I’d expect there will be four or five sides capable of beating each other at the top – the likes of Netherton, Parson Drove, ICA Sports – so it won’t be easy.

“But I think we’ll be alright. We’ve got some strong and well-established players and also some good younger players at the club.”

But they’ve moved to bring Andy Law and Dalius Kisla back to the club, while ex-Wisbech Town ace Edgaras Buzas has signed.

Keeper Brendan Taylor has also stepped up to the first team, with 17-year-old Jenson Patterson providing him with competition for the number one jersey.

Harrox are playing catch up on their rivals after a number of their players were forced to self-isolate due to COVID-19.

The rest of the teams have already played twice.