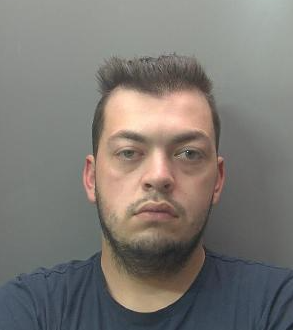 A man who tried to burgle a Cowbit home was caught by police as he kept watch in a getaway car.

The footage showed him scoping out the property before returning with a group of accomplices in his role as the getaway driver.

Dear sounded the horn when the homeowners returned and the group fled the scene.

Police discovered the patio doors had been smashed but no entry gained.

At about 9pm on the same day, officers were called to a burglary in Gunthorpe, Peterborough, where the victims were on holiday.

Officers found Dear sat in the passenger seat of the same car as the burglary earlier in the day.

He sounded the horn and his accomplices made off over a garden fence. The garden gate had been broken but the property was still secure.

Dear was arrested and found to be wearing the same clothing as in the earlier CCTV footage.

Dear, of Armthorpe Road, Doncaster, pleaded guilty to two counts of attempted burglary and was sentenced to three years and nine months in prison at Cambridge Crown Court.

Detective constable Craig Trevor of Cambridgeshire Police, who investigated, said: “Dear is a prolific offender, having been jailed back in 2019 for his part in a number of burglaries targeting high-performance cars, jewellery and dogs across the region

“He was brazen in his crimes and cocky enough to think he wouldn’t get caught. Unluckily for him, by working alongside Lincolnshire Police we did manage to catch up with him and bring him to justice once again.

“Burglary can have a devastating impact on victims, which is why tackling it is one of our priorities. We are working hard every day to bring offenders before the courts.”