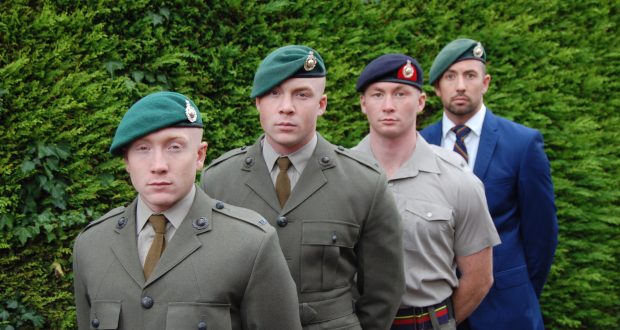 Jack, George, Joe and Sam Fowler will all have a green beret.

A Whaplode quartet of brothers will all be wearing their green berets with pride later this month.

But a special fundraiser they had planned for today has been postponed because of Coronavirus.

Today will see Joe Fowler (20), complete the final test of his Royal Marine training with a 30-mile commando run. He was to have been joined by his brothers Sam, Jack and George to raise money for a military charity.

“We will be making a little bit of Marine history when Joe gets his green beret as the fourth brother,” said Sam.

All of them attended the University Academy Holbeach and will be only the fourth band of four brothers in the 356-year history of the Commando Force, part of the Royal Navy.

“It is a shame for the lads that no-one is allowed to go and see them officially get their berets. It’s a huge achievement and a real milestone in their lives, but this year has meant things have to be done differently.

“It is a shame for the Marines as well because it is part of the recruitment, having family come and watch. It encouraged my brothers to join,” he said.

Joe is completing his training at Lympstone, Devon, where older brother George (22) is serving. Their brother Jack (24) serves with 43 Commando.

If Sam completes the 30 miler within an eight hour time limit, he will earn the right to be presented with his green beret on November 20.

He will then be allowed home for the weekend before being deployed on Monday, November 23.

The brothers have four sisters – none of whom have shown any sign of wanting to be a Royal Marine.