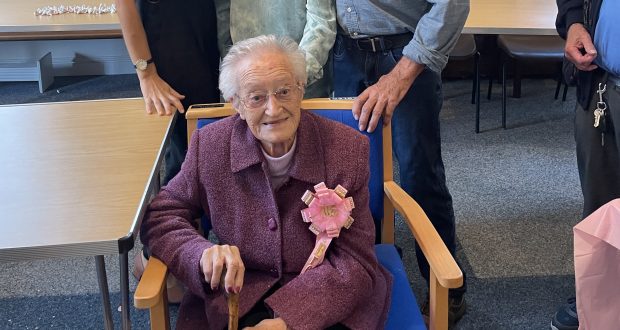 Brenda Carrott is pictured below on her 105th birthday with son Peter, daughter-in-law Claudia and granddaughter Leanna.

Friends and family of a Moulton Chapel woman flew in from as far afield as America last week for her 105th birthday.

A party was held for Brenda Carrott on Thursday, October 7 at the village’s Methodist Chapel where she used to play the organ.

Brenda, who has lived in the same home for her whole life, was raised by her mother Betsey single-handedly after her father Thomas was killed while fighting in World War One when she was just 13-months-old.

She took up a dress making apprenticeship working in Beryl’s in Spalding.

The couple’s 75-year-old son Peter was among those who flew in from America for the birthday celebrations alongside his partner Claudia and Brenda’s granddaughter Leanna.

Another granddaughter Natalie was unable to attend.

Brenda was asked what is her secret to a long life and she said keep eating well.