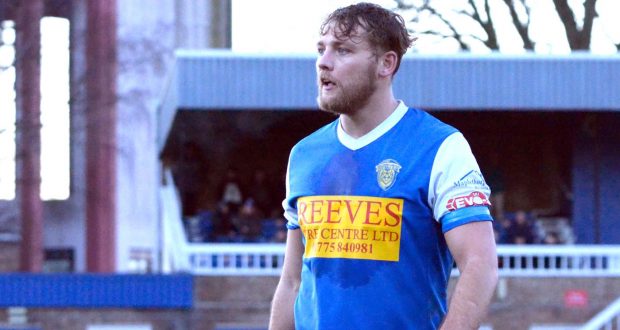 Confident Spalding United boss Chris Rawlinson believes that his side will be on the brink of clinching a play-off place if they can emerge unscathed from their next four fixtures.

The Tulips, currently third in Evo-Stik NPL First Division South, have a tough-looking spell of four away games in two weeks to contend with.

Following their impressive 1-0 win over Belper Town on Saturday, the run of matches isn’t really make or break for Spalding – given that they have a nice cushion over their chief rivals AFC Rushden & Diamonds, Basford United, Newcastle Town and Leek Town.

Rawlinson’s goal is to avoid defeat in the clashes at Leek Town (Saturday, 3pm), Stocksbridge Park Steels (April 1), Witton Albion (April 6) and Kidsgrove Athletic (April 8) – which would leave them in a strong position for their final four matches.

The Spalding supremo concedes that defeats in all four outings would be “catastrophic”, but doesn’t feel his charges – who have lost just nine times all season – have that kind of run in them.

He sees Saturday’s trip to Leek as a “huge game” – as beating them would essentially end any lingering doubts that they could overhaul the Tulips.

“Saturday’s win was a big one for us,” admitted Rawlinson. “It was vitally important to get back to winning ways after the Witton Albion defeat.

“Belper are a very difficult side to play against – they might be mid-table, but they’ve only lost two more games than us in the league.

“We probably should have won by more, but the result was all that matters.

“It sets us up nicely for this run of away games now.

“It looks tough on paper, but I see it as a period that could be great for us and that can really push us towards the finishing line.

“If we can avoid defeat in the four matches, we then have three of our last four at home. Hopefully the local public would get behind us in those matches and we’d have a great chance of getting a favourable play-off position.

“The Leek game on Saturday is massive. It’s important we don’t let them beat us – even a draw would make it hard for them to chase us down.

“It’d take some sort of catastrophic implosion – like losing all four games – for us to lose the initiative. But I don’t see that happening, this squad hasn’t had that sort of run all season.”

Rawlinson’s squad is boosted by a number of key players making their timely returns. Influential midfielder Nathan Whitehead is back from suspension for the Leek game, while defender Kern Miller and goal-machine Leon Mettam are both available again after missing the Belper win.

Neal Spafford serves the final game of his ban, though, while Jonny Lockie is on Lincolnshire under-18 duty.