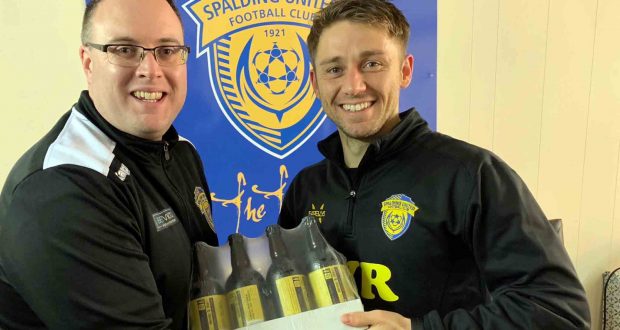 TOP MAN: Interim boss Lewis Thorogood (left) hands over a refreshing prize to captain Lewis Browhill after he was named Spalding United's Bowlands Brewery Player of the Month for December. Photo courtesy of @SpaldingUnited on Twitter.

Luca Bucci’s maiden Spalding United goal fired them to a first home victory since September as they edged past Ilkeston Town on Saturday.

The 17-year-old Lincoln City loanee slotted in the only goal of another match which saw the Tulips turn in a fully committed and disciplined performance to beat off a huge challenge by visiting Ilkeston for valuable BetVictor NPL South East Division points.

The three points won at the Sir Halley Stewart Playing Field take the Tulips above the total they achieved for the whole of last season, and move them another step nearer to a play-off position in eighth.

Interim boss Lewis Thorogood said: “It was a very windy day, which was a bit of a leveller to say the least. During the first half I said to the lads that we’d give ourselves a decent chance of winning if we went in 0-0.

“To go in 1-0 up was a real bonus and all the lads – and I mean all of the squad – have stood together, dug in and showed the same intensity and same work rate which we’ve now seen in the last three games.

“That bodes well moving into a very difficult game next Saturday.”

In difficult windy conditions, which the Tulips had full in their faces for the first half, the visitors – with former Spalding striker Kieran Wells at the centre of things – dominated with a constant flow of attacking moves.

Shortly afterwards Owen Betts, playing his final game for the Tulips before returning to parent club Notts County, scrambled the ball clear from the line as the Robins’ assault continued.

But Spalding dug in deep and, midway through the half, were only inches away from grabbing the lead with James Hugo’s shot following an assist by the energetic Elliott Burrell flashing across the Ilkeston goal.

The deadlock was broken, albeit against the overall run of play, in the 35th minute.

A free-kick was won just outside the Ilkeston penalty area and young Bucci stepped up to take the kick.

The ball was heading for the target but took a huge deflection from a defender, turning it past the wrong-footed Ross Durrant and into the net.

Early in the second half Bucci blazed the ball over the target and, with the blustery conditions in their favour, the Tulips began to seize a greater amount of the play.

Inspirational skipper Lewis Brownhill threaded the ball down the left side to put Kevin Bastos on a run for goal, but a superb block by Durrant denied him and the Tulips a second goal.

Jack Smith curled the ball wide from a good position and Brownhill also went close after connecting with a clever through pass from Kegan Everington, but 1-0 was enough for the points.

The win moves Spalding to within four points of the play-offs.