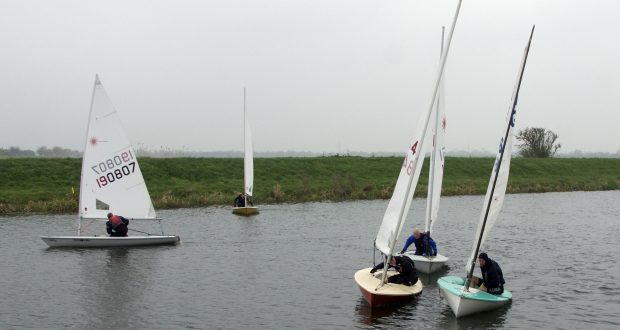 Tom Bell bagged a clean sweep of victories at Welland Yacht Club on Sunday to lift the Robert Creek Shield.

Bell, in clear air, managed to pull out a good lead by the time they reached the first bend in the river, with the following five all starting to bunch up. Although Follington jnr was starting to trail, the favourable handicap would still keep her in contention.

Once around the top mark as they all tacked back down the course, Bell still maintained his sizeable lead with Holland now in second followed closely by Cox and Chapman.

As they completed the first lap Follington jnr elected to take a lap time, as the rest started the final lap with Cox trying to keep the gap to the lead two boats within his handicap.

Once handicaps were applied, Bell retained first with Cox moving up to second and Holland third.

Race two with a similar wind strength, the course was reset to make the most of the upriver section.

Bell made it first around the windward mark, but he was soon passed by Follington snr and Chapman, with Cox fourth.

Although Bell would regain second on the run down towards the mile straight, Chapman was able to match him for pace until rounding the top mark and the tack back upwind.

This time the fleet remained more tightly packed, with Bell having regained the lead from Chapman second, Cox third. At the back, Katie Follington remained close to the middle section of the fleet – which would pay off at the end.

After handicap Bell again retained the win from Katie Follington and Cox.

By the start of the final race the drizzle had arrived to make for a wet start for the five remaining competitors.

On a shortened course Bell sealed overall victory with a trio of wins with Cox second and Holland third. This was also be the overall result.