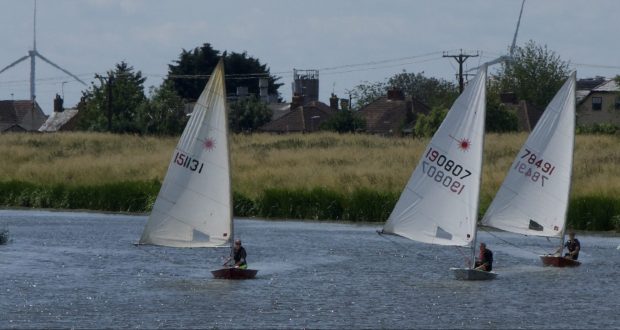 Tom Bell was the overall winner as Welland Yacht Club finally returned to the waters and competitive sport.

After last week’s cancellation due to high winds there was doubt over this week’s as so little wind was forecast.

But with various measures put in place to keep to the latest guidelines on social distancing, it was also decided that pursuit racing was the most appropriate for the current situation.

A pursuit race is where the boat class handicap is applied at the start to give each class a separate start time, the theory being all boats should be level at the end of the race duration.

The result is the order of the boats once race duration ends.

This helps reduce the number of boats starting at anyone time.

Six people in five boats took to the water for the first of the days two races.

However with only two different boat classes being used (one Graduate and four Laser full rigs) the staggered start theory didn’t really play out.

With no Topper class the 60-minute duration began and the first boat away at 8.40am into the duration would be the Graduate of Neal Tack and crew Rebecca Slator who made little initial progress in the light winds.

Once the Lasers of Tom Bell, Alan Cox, Gail and Katie Follington got underway Cox led from Bell then Gail Follington from daughter Katie as they set off in pursuit of Tack and Slator.

Bell passed Cox as they got to the first bend and by the time they had reached three-quarter distance to the windward mark, he had managed to take the outright lead with Cox having now moved to second with Tack and Slator in third and Gail Follington still in fourth from daughter Katie in fifth.

As they came back down the clubhouse straight for the first time G Follington had moved up to third.

During the tacking back to the windward mark on the second lap, Cox started to make gains on Bell with G Follington also closing in, Tack and Slator still comfortably fourth from K Follington.

Having rounded the windward mark for the second time the lead boats headed down the clubhouse straight with Bell edging into the lead and Cox and G Follington neck and neck.

As Bell took the win, Follington claimed the second place as time was called having completed one and three-quarter laps.

Tack and Slator was fourth and Katie Follington fifth.

After a 20-minute break Tack and Slator were the first to start race two and with more breeze they pulled out a reasonable lead prior to the Lasers starting.

As the start time approached for the Lasers a gust blew through nearly causing Cox and G Follington to capsize.

The stronger breeze allowed Tack and Slator to hold onto the lead for the entire first lap, it would be towards the end of the clubhouse straight before Bell finally took the lead then followed by Cox and G Follington as they headed up to the windward mark for the second time.

With just under ten minutes to go, the lead three rounded onto the clubhouse straight with G Follington ahead of Cox, with Bell third.

With five minutes to go Cox took the lead for the final time with Follington second and Bell third at this point. The overall result would be a three-way tie, all on four points.

Having rounded the leeward and tacking back up the course, Bell passed Follington for second in the final minutes which was to prove decisive in the overall result.

Once time was called just over two laps had been completed.

Like In the first race, Tack and Slator finished fourth ahead of Katie Follington.

Bell’s late overtake led to him taking the overall victory from Cox with Gail Follington in third.

Anyone wanting to find out more about sailing should contact the club via email secretary@wellandyachtclub.co.uk