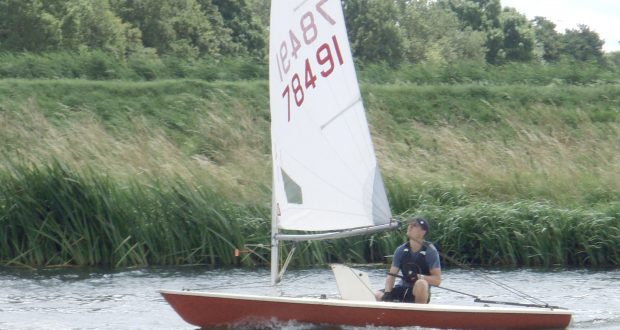 Tom Bell claimed the Welland Paddle regatta crown by the tiniest of margins over two races.

With a stronger breeze than the previous two weeks, Sunday saw nine boats take to the start line for the Welland Yachting Club event

Katie Follington in her Topper was the first boat to be away followed by the Graduate of Neal Tack with crew Rebecca Slator, then the Laser Radials of Tom Bell, Gail Follington, Alan Cox and Mark Holland.

Following those was the OK of Andy Agar and finally the Lasers of Andy Prior and Clive Herd.

While the Radials vied for position ready for their allotted time Holland capsized whilst trying to avoid another boat.

The other three Radials made their start with the OK of Agar closely followed by the Lasers of Prior and Herd.

Once all boats were away Katie Follington capsized and retired followed by Gail Follington.

With Bell catching Tack and Slator and Prior and Herd catching the rest of the fleet.

Cox was next to capsize then disaster struck Agar as the traveller on his boat broke.

With Cox taking a second capsize before retiring, Agar had to be recovered back to the clubhouse.

Bell was now in the lead from Tack & Slator with Prior close behind with Herd fourth and Holland fifth.

Once around the lea mark (clubhouse end) Prior had closed the gap to Bell overtaking Tack & Slator.
Holland took another capsize and retired from the race.

As the lead two rounded the windward mark for the second time, Prior took the lead from Bell which he held until the end with Tack & Slator third and Herd fourth.

Only five boats took to the start of the second race, with Gail Follington now in a Topper the first away.

She was followed by Tack & Slator with Bell starting third in the Radial rig Laser leaving the Full rig Lasers of Prior and Herd to finalise the fleet.

The wind had eased slightly allowing all boats to stay upright.

Bell soon passed Tack & Slator with Prior and Herd neck and neck as they tacked their way up the course.

With Follington still holding onto to the lead from Bell on the run back down to the clubhouse, Prior and Herd moved up to third and fourth with Tack & Slator fifth.

The order would remain the same although the gaps between boats closed up for the entire second lap.

With just under 10 minutes to go and nearly halfway around the third lap, Bell would pass Follington to take the lead and claim the win.

With the two full rig Lasers now closing rapidly on the run back down to the start line, Follington would soon find herself in fourth spot despite all her hard work to keep the lead for 50 odd minutes.

Prior was third and Herd fourth with Tack & Slator fifth.

So with three points a piece and a first and second place the rule of count back awarded victory to whoever had the later win.

Therefore Bell takes the Welland Paddle from Prior second.