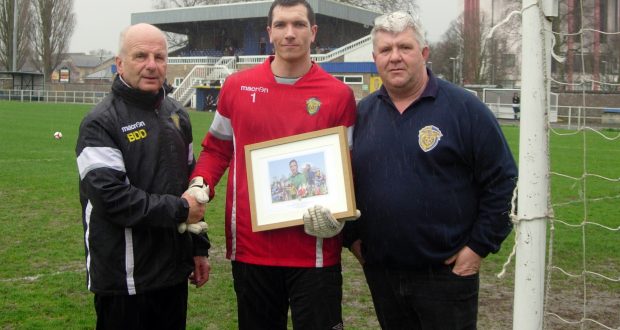 200 NOT OUT: Michael Duggan receieves a special memento of his time with Spalding United from director of football Bob Don-Duncan (left) and chairman Andy Gay (right). The loyal keeper made his 200th appearance for the Tulips on Saturday. Photo supplied

A rasping penalty lashed home by Lee Beeson at the Sir Halley Stewart Field on Saturday ensured that the Tulips remain on course for a promotion play-off place in Evo-Stik NPL First Division South.

The 57th minute spot-kick, awarded when Conor Higginson was unceremoniously brought down just inside the area, saw off a spirited challenge by mid-table Belper Town and saw the Tulips complete the double over the Derbyshire club.

The three points gained enabled the third-placed Tulips to close the gap on top two Shaw Lane and Witton Albion, who both lost, and remain comfortably ahead of the chasing pack.

As the scoreline suggests, Saturday’s encounter was a keenly and closely-fought affair with clear scoring opportunities at a premium with defences largely in control.

Both goalkeepers also featured with the Tulips’ Michael Duggan, on his 200th appearance for the club, doing superbly to turn a deflected shot by Eric Graves past a post in the opening minutes.

Then, twice in as many first-half minutes, Belper’s Scott Low denied the hard-hitting Beeson, who was later named as man of the match by game sponsors Electrotech Solutions of Holbeach.

Belper opened the second half with a period of sustained pressure, having one good effort blocked in a packed home area, quickly followed by a corner which was ultimately cleared by the hard-working Paul Walker – who was covering for the unavailable Kern Miller in central defence alongside skipper Nathan Stainfield.

At the other end, Cenk Acar ducked and weaved a passage through the Belper rearguard to find space to put over a good cross which was headed away for a corner by Graves. The young Lincoln City loanee was then denied by keeper Low.

The deadlock was finally ended on 57 minutes when home pressure was rewarded with a penalty following the foul on Higginson. Beeson, one of the best strikers of a dead ball in the league, gave Low no chance.

The Tulips largely took control for the remainder of the game but were unable to add to their score, although confidently defended their advantage.