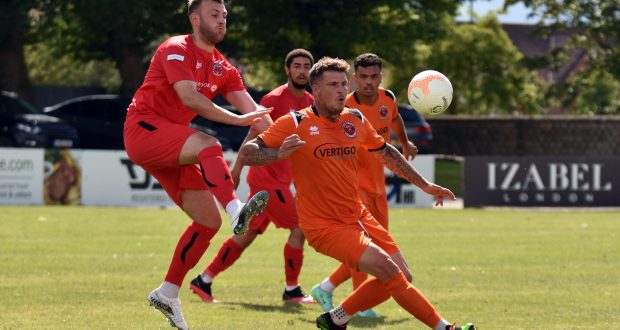 Ten-man Pinchbeck United put up a strong fight against Boston Town on Saturday before eventually succumbing to a 3-1 derby defeat at the Sir Halley Stewart Playing Field.

The Knights performed admirably against their high-flying rivals at the Sir Halley, given they weren’t at their full complement of players for more than an hour after Ben Robson was sent off for handling on the line.

Jack Fixter did haul Lewis Thorogood’s side level from the penalty spot early in the second period, but further goals from Beeson (a rocket of a shot on 58 minutes) and Abou Sylla late on settled the contest.

The loss leaves Pinchbeck just two points clear of the drop zone after relegation rivals Quorn picked up a point against Newark.

Knights boss Thorogood was unhappy with the officials on the day and felt Boston could have been reduced to ten men following a foul on a clean through Fin Armond for their penalty, was proud of his side despite the defeat.

He said: “I felt we looked confident early on at 0-0 and neither side looked like scoring, to be fair. Boston are a good top five side, so that pleased me.

“The red changed the game, sadly. I felt the officials had a bad game if I’m honest and the referee couldn’t wait to send Ben off and dictated the game a little.

“Alex made a great save from the penalty, but we perhaps could have done better with their first goal.

“After that, we settled down and came out in the second half with no fear.

“Fin raced through and was taken down for a penalty, which could – and in my opinion should – have been a red card.

“We merited 1-1, but Lee Beeson then did what he can do and scored an absolute beauty. Likewise, Abou Sylla, who was great all game, scored a fine goal – even if he did look three yards offside.

“We showed good heart and fight, but credit to Boston for grinding out a win.”