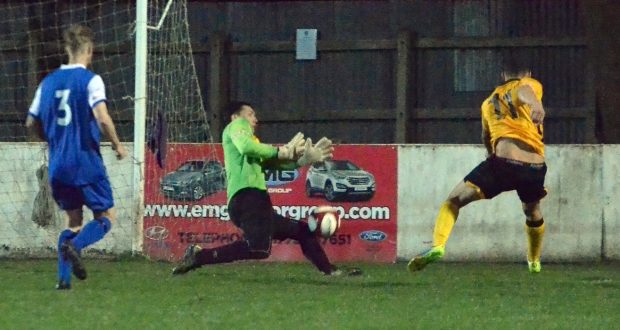 BIG SAVE: Michael Duggan, who was recently named in the Evo-Stik NPL Division One South team of the season, saves from Courey Grantham. Photo by JAKE WHITELEY

The Tulips played most of the second half with ten men after Matt Varley’s red card and saw Lee Beeson’s penalty come back off the bar as they looked to pinch an unlikely victory at the Sir Halley Stewart Playing Field.

In the end, they were indebted to a number of fine saves from Michael Duggan, who ensured the clash between two of the league’s top four ended goalless.

Tulips boss Chris Rawlinson was happy enough with a share of the spoils – and has told his side to go out and clinch third place by beating Bedworth United at home on Saturday. 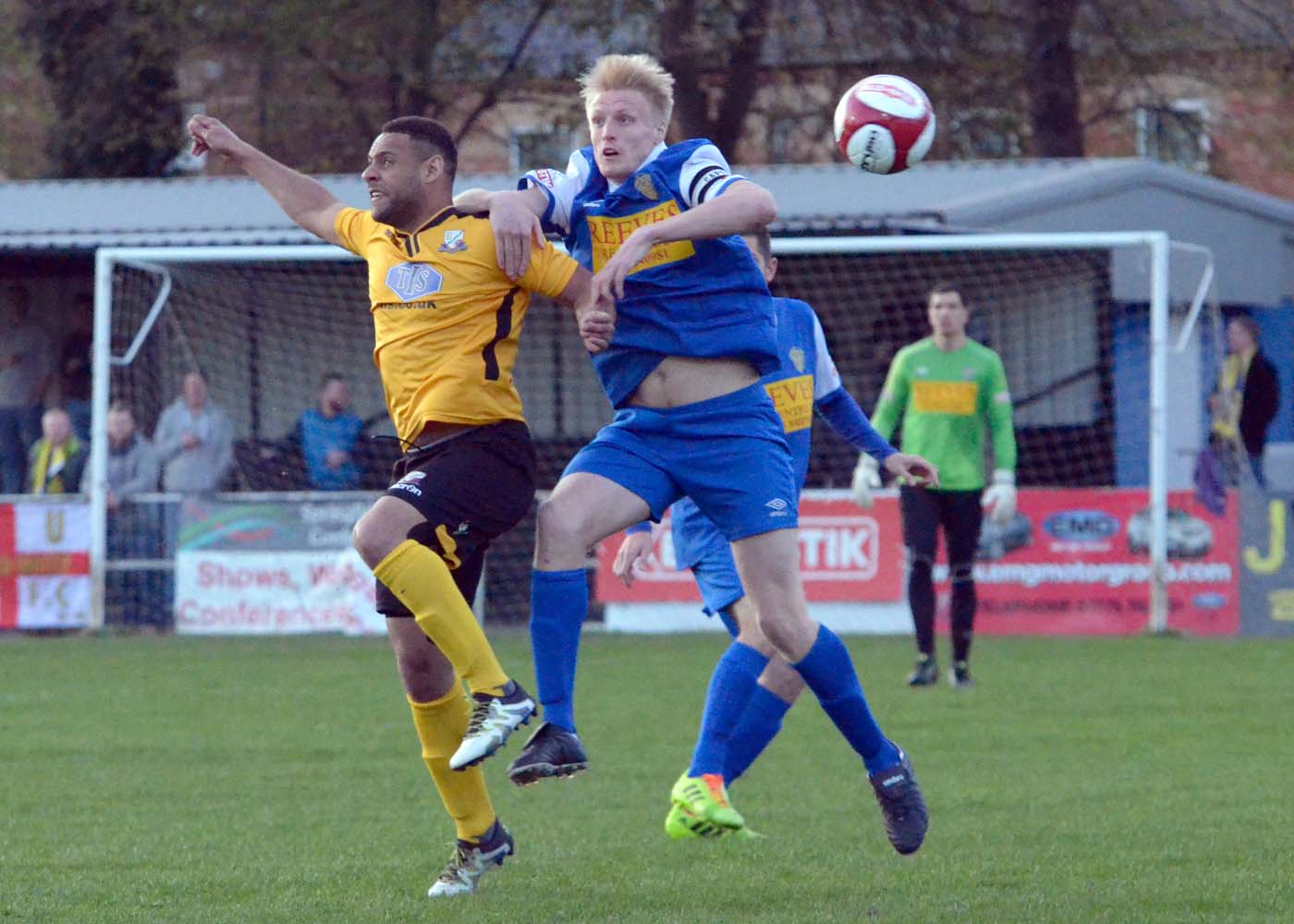 CAPTAIN’S EFFORT: Skipper Nathan Stainfield, named in the team of the season for the third year in a row, battles for the ball. Photo by JAKE WHITELEY

“I do think it’s a good point,” said Rawlinson. “But I’m disappointed that we missed the penalty.

“To be fair, Michael Duggan pulled off some wonderful saves for us towards the end of the game. 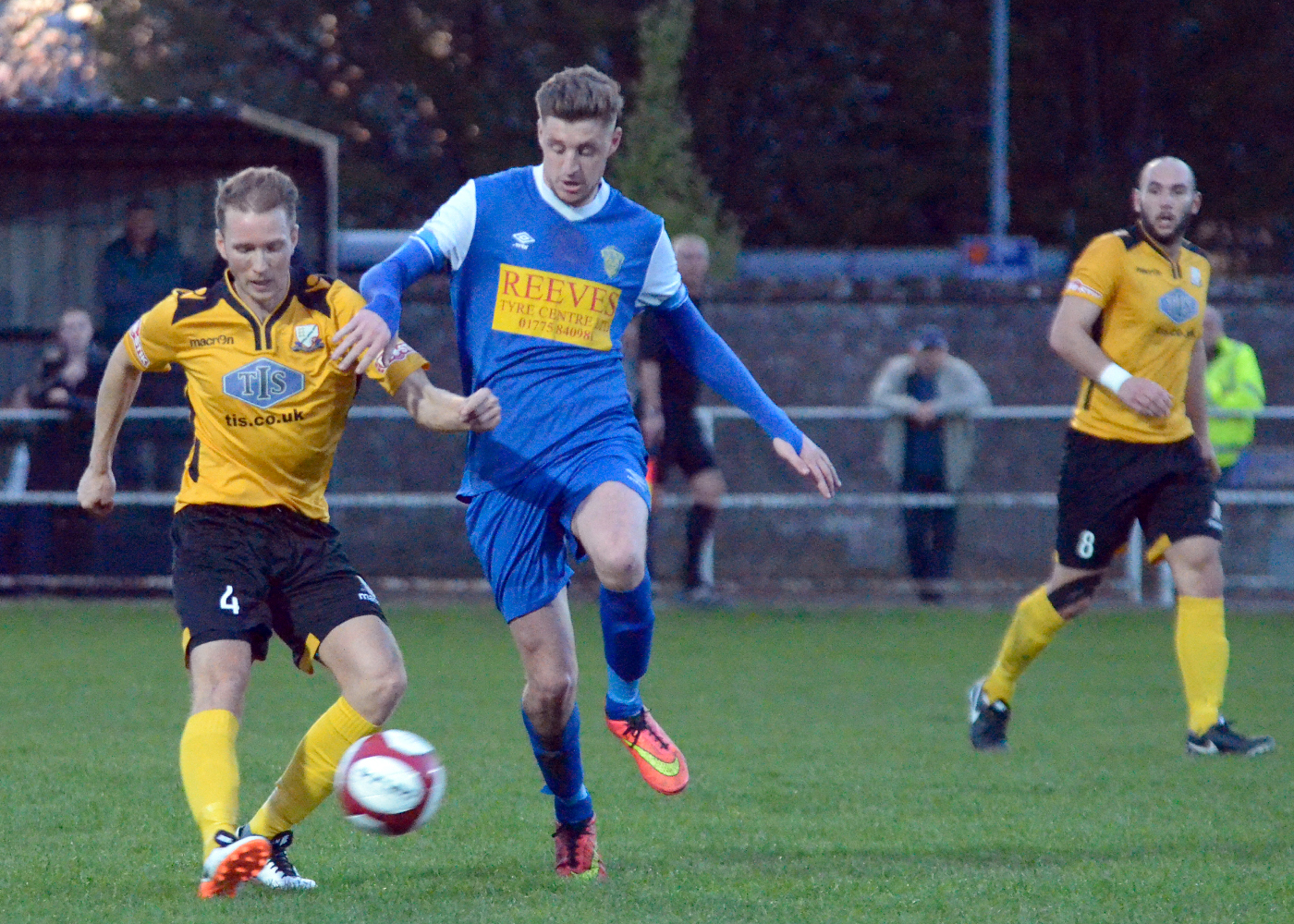 ON THE BALL: Top scorer Brad Wells, the third Spalding player named in the Evo-Stik NPL First Division South team of the season, in action against Basford. Photo by JAKE WHITELEY

“I think we shaded it. In the first half, we had enough chances to win the game.

“The boys then responded well to the sending off. They were absolutely knackered in the dressing room, which shows how hard they worked.

“I can’t ask any more from them. Defensively we were different class, even without Nathan Stainfield being at his best.

“In the end, it’s a really good point for us. Now, if we can win on Saturday, that’s third place wrapped up.

“That has to be the target now. If we can guarantee third with two games left, it would be very pleasing. 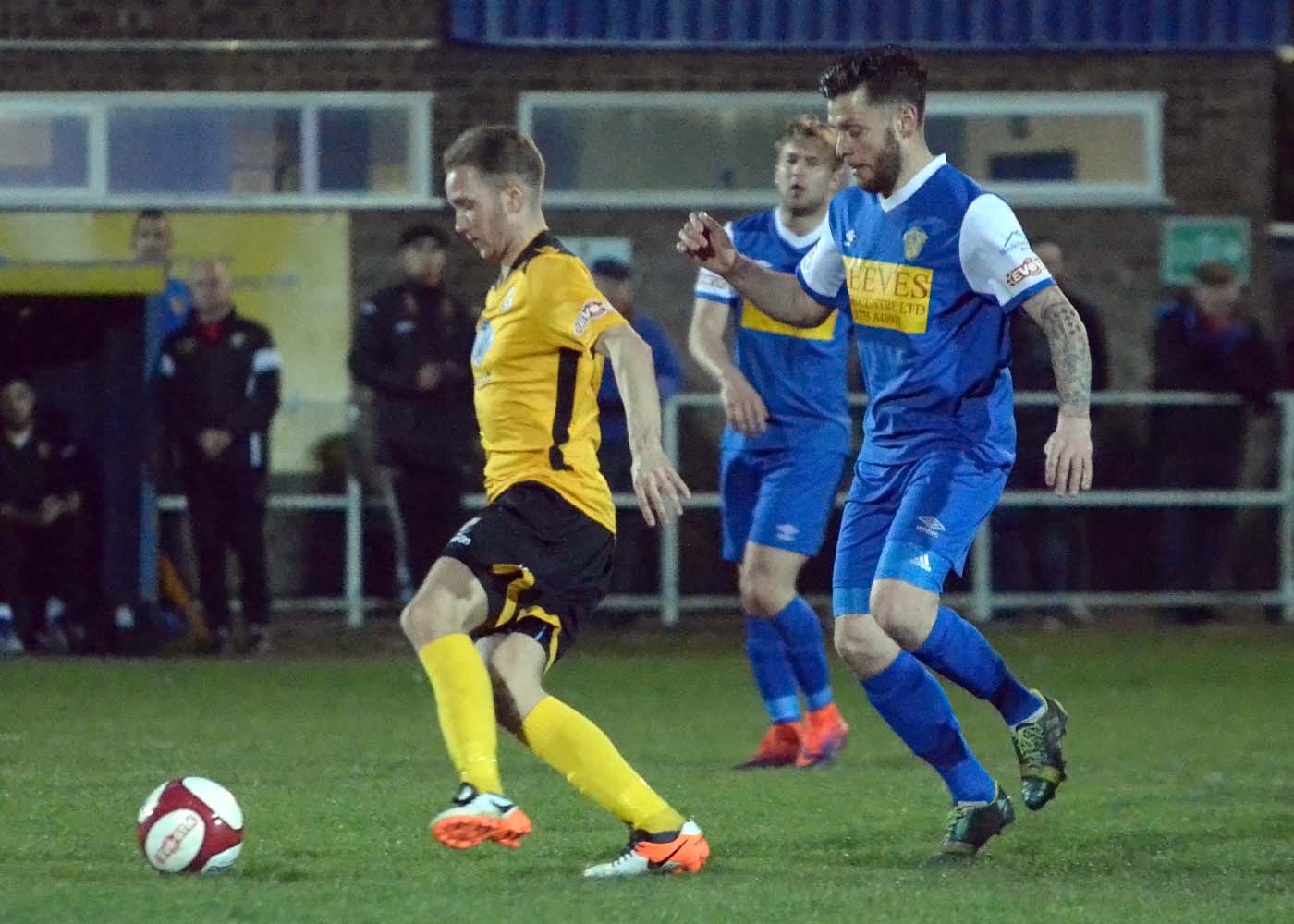 OFF: Matt Varley was dismissed for two yellow cards. Photo by JAKE WHITELEY

“It’s set up for us now. If we can win one of our last three games it sets up a home play-off. I know the club has won the UCL, but this is a higher level and would be a really big event for Spalding.”

Spalding started much the better at an expectant Sir Halley and fashioned two great early chances.

A great take and pass from Brad Wells allowed Cenk Acar a sight of goal, but his effort was saved at the near post by Saul Deeney.

Leon Mettam then had an even better opening, but failed to get enough contact on a superb deep cross from the right by Conor Higginson.

Basford grew into the game and threatened down the left, but Duggan did superbly well to hold onto a dangerous cross from Kieron Fenton – who had two team-mates waiting to head home at the back post. 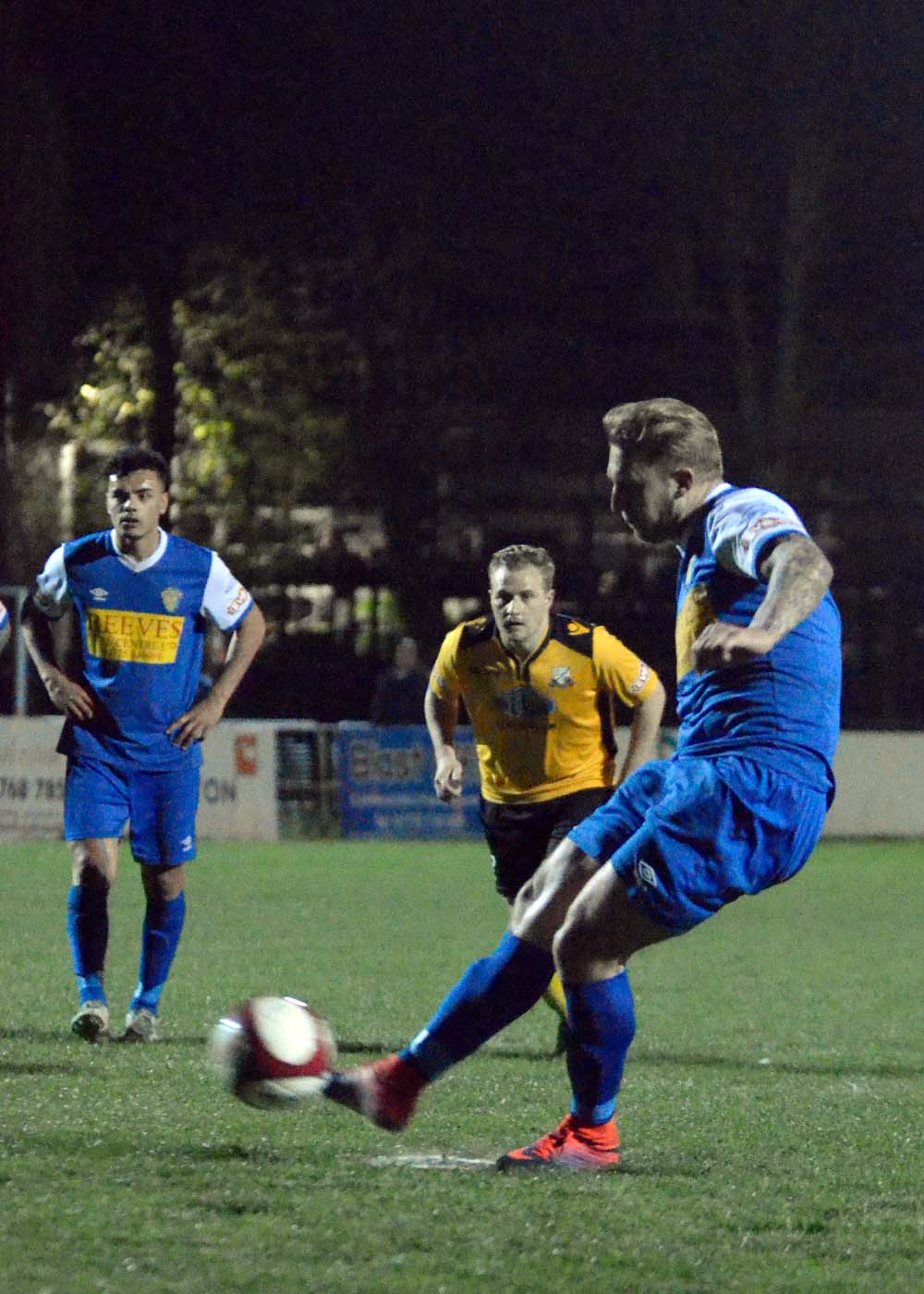 However, the Tulips continued to fashion the better chances and were once again denied by Deeney when he palmed away a fizzing Beeson drive.

Wells was first to reach the rebound, but his effort was kicked off the line.

The sides began to nullify each other as the half grew on, with the final chance being a flicked header by Basford’s Deon Meikle, which narrowly missed the far corner.

Disaster struck early in the second period, with Varley harshly given a second yellow for a late tackle. 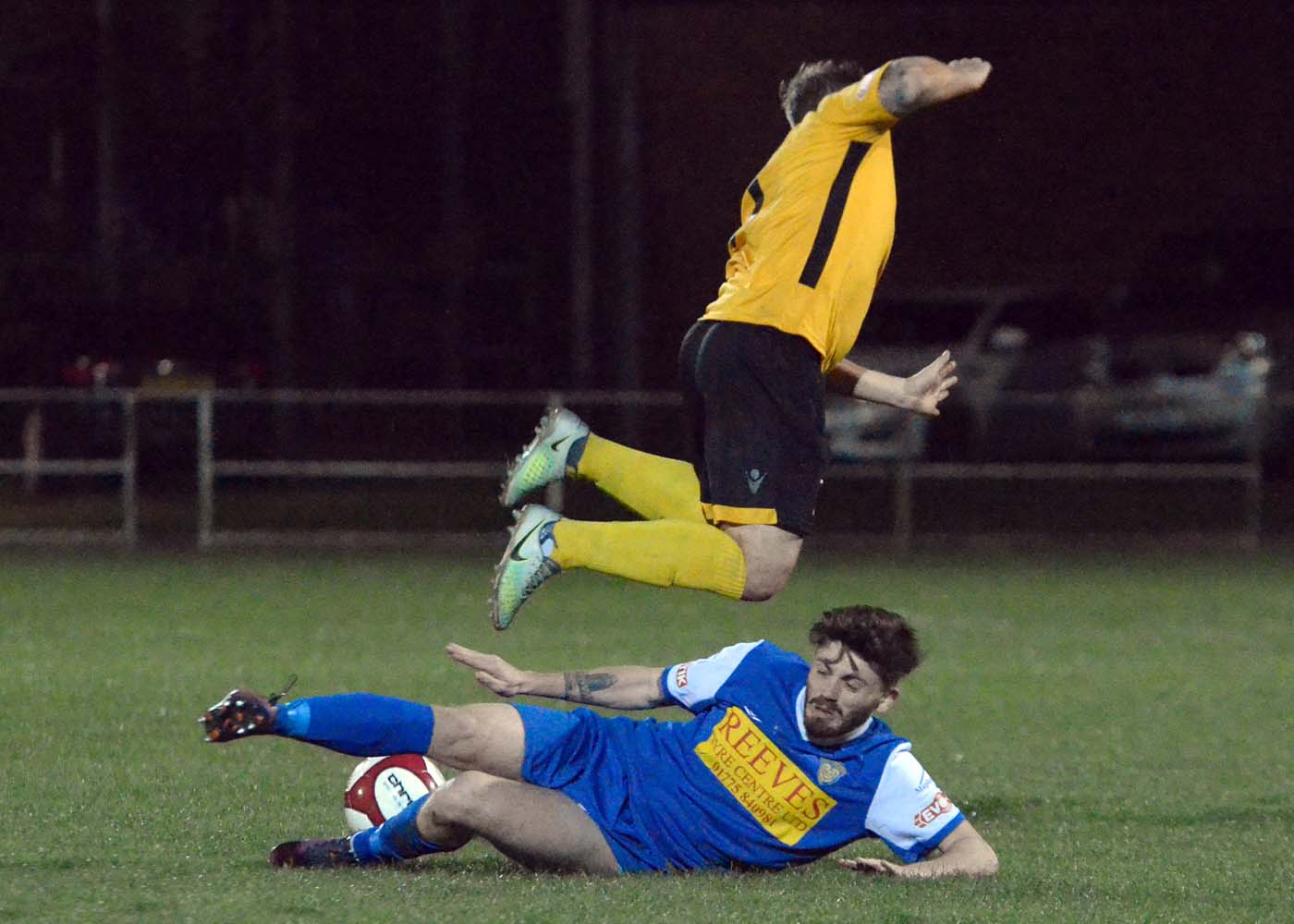 WELL IN: Jordan Lemon slides in on Tuesday. Photo by JAKE WHITELEY

Matt Thornhill then headed over from close range as the visitors began to grow in confidence.

But it was Spalding who were given a golden opportunity to open the scoring when Wells was hauled down in the box for a clear penalty.

Beeson sent Deeney the wrong way with his effort, but it came back off the underside of the bar.

From then on it was the Duggan show, as he pulled off four big saves to help the Tulips grab a draw.

First, he got down low to keep our James Reid’s stinging low drive, before superbly denying a clean-through Courey Grantham at his near post. 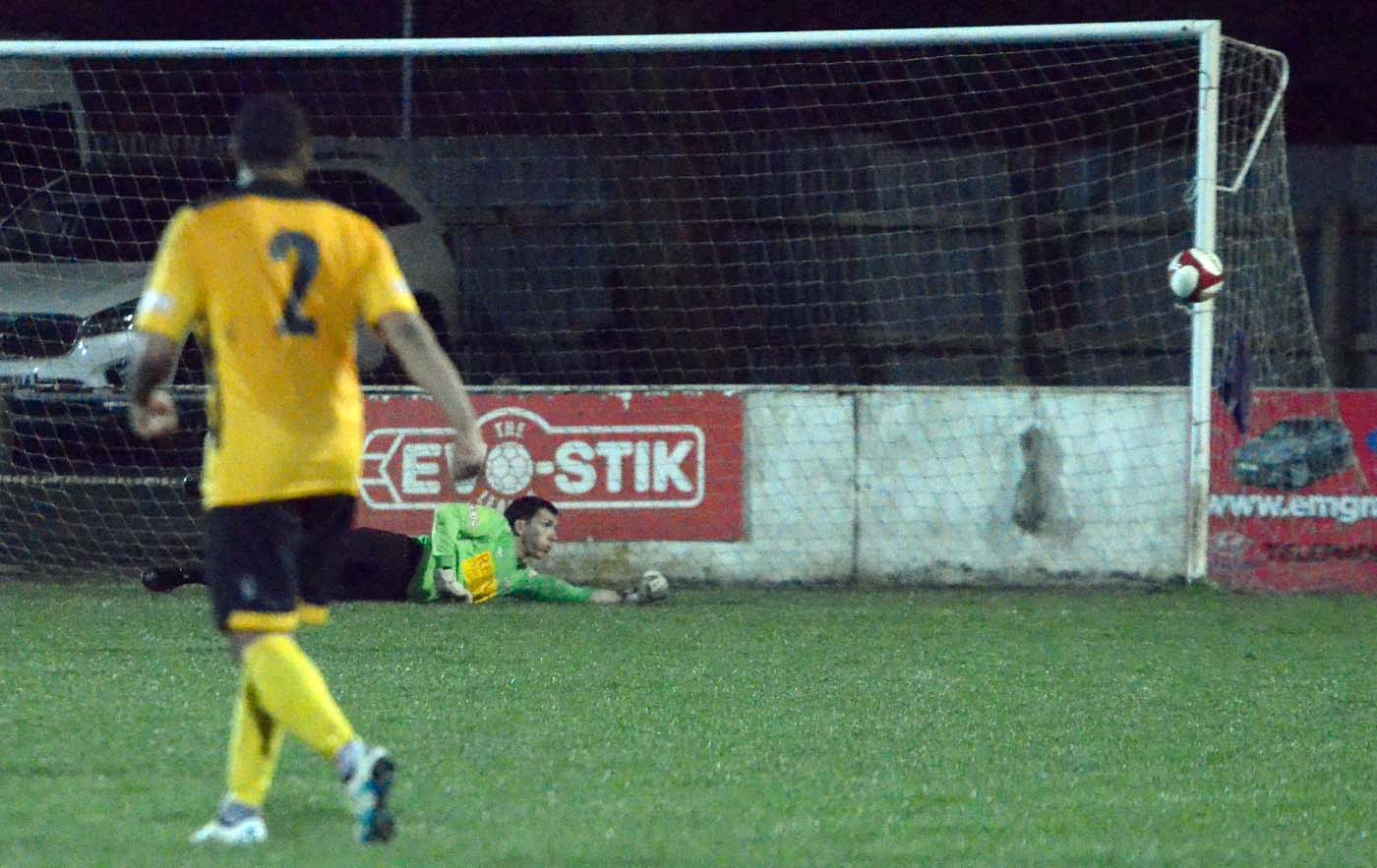 Duggan then expertly held Ben Hutchinson’s thunderous 35-yard drive, before turning another Reid drive away in the final minute.

With just three games to play, the Tulips are three points away from the home play-off draw they have long coveted.

The squad will be boosted by the return of Sam Downey, Jonny Lockie and Jason Field for the home date with Bedworth on Saturday (3pm), while defender Kern Miller is back for Lincoln United away clash on Easter Monday (3pm).