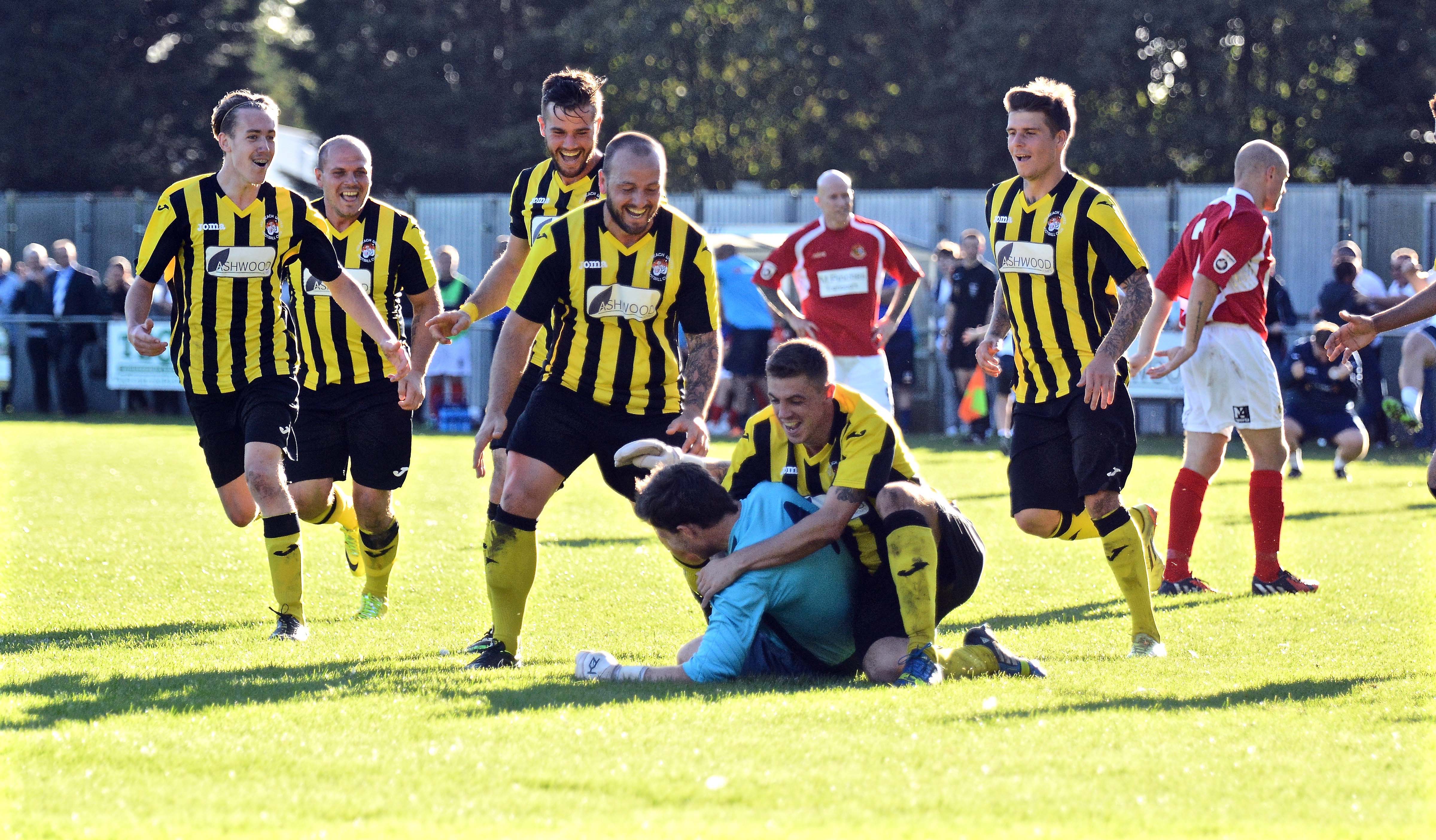 MAGIC MOMENT: Keeper Ricky Drury is mobbed by his team-mates after THAT goal back in 2015. Can Holbeach recreate another magic moment in the FA Cup? Photo by STEVE RELF

The Tigers, who knocked out Kirby Muxloe in the last round after a late Josh Ford strike, will host the ‘Pitching In’ NPL South East Division side at Carter’s Park in the Preliminary Round on Saturday (3pm).

Boss Barnes, who remembers watching Holbeach play Wrexham in the First Round proper as a fan back in the 1980s, sees the competition as a chance for the club to bank some much-needed prize money.

He says his side will show Sheffield, who play in the same league as rivals Spalding United, a degree of respect. But the Holbeach native hopes the fans turn out in force to help roar them to a famous victory.

“It’s a nice tie for us,” admitted Barnes. “Sheffield will obviously be the favourites, they play at a better standard and it’s a step up for us.

“To be honest, there is no pressure on us to beat them and nobody would be surprised if we lost.

“We will show them the respect they deserve, but there’s absolutely no reason why we can’t get a result.

“We can look forward to the game and, if we play to our strengths, we will get opportunities I’m sure.

“At this level, the FA Cup is all about the money really. Every non-league club has suffered because of the pandemic, so the prize money would be a big boost. We’ll do our best to go as far as we can.”

As a player, Barnes struggled to recall any memorable moments in the national competition.

Goalkeeper Ricky Drury’s overhead kick goal against Worcester City back in 2015 made headlines in the national media and remains the club’s biggest FA Cup highlight in recent memory.

But Barnes is hopeful that his side can make waves this time around.

He added: “I don’t really have any standout FA Cup memories as a player, if I’m honest.

“Ricky’s goal is obviously still talked about, but I don’t think anybody at the club has gone on any big runs in the competition before.

“I’m old enough to remember being at the Wrexham game back in the 1980s, but that’s about it.

“There’s always a chance to write your own history at the club in these kind of games and I’m sure they’ll do their best to do just that.”

Barnes expects to be without defender Jack Withers and forward Reif Clarke, but centre back Joe Braithwaite is closing on full fitness and could be available.

Everybody else should be available after coming through Wedneday night’s 2-1 derby defeat against Deeping Rangers.

Holbeach have another derby to contend with on Tuesday night as they make the short trip to rivals Boston Town (7.45pm).

The two South Lincolnshire sides enjoyed a keen rivalry last season and that is expected to continue this time around.