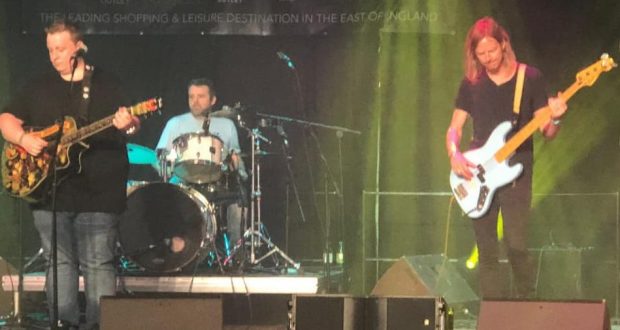 Stephen Tanner and The Runaways at Spalding Festival.

Members of two Spalding bands are left without instruments and a place to play after thieves cleared their rehearsal room out of thousands of pounds worth of instruments.

Members of the group are now appealing for a new space to regularly rehearse in the area.
Dan Parker, who plays drums in I Am The Dice and Stephen Tanner and The Runaways went to the Spalding Common band space on Saturday (June 15) to find everything gone.

“They smashed through a couple of doors and the building is so badly trashed we can’t use it,” Dan said.

The band had used the space for around ten years and their entire amassed musical collection was taken.

“It was an important place for us and these people have just trashed it,” Dan said.

“Instruments have a sentimentality to them,” he added.

As well as sentimental value, the monetary loss was also high, with Dan losing more than £2,000 worth of drum equipment alone.

“It’s a nasty thing to do, to take away from people. That sense of entitlement they must have, they’re heartless, callous scumbags.”

Steven Tanner and The Runaways recently played Spalding Festival and had been rehearsing new songs the week before the raid, ready to record an album.

“We’re determined not to let this beat us,” Dan said, explaining that they plan to continue with recording plans thanks to the kindness of the local musical community.

“We’ve had an incredible response on soclal media,” he said of a Facebook post detailing the theft, which has been shared more than 1,000 times.

“Locally we’ve had people offering to lend us gear,” he added.

“We’ll slowly buy equipment to replace everything we’ve lost but the biggest hurdle is looking for a permanent rehearsal space,” Dan said.

The band have asked anyone who can provide rehearsal space or who has suspicions about musical instruments for sale to contact them online at facebook.com/iamthedice