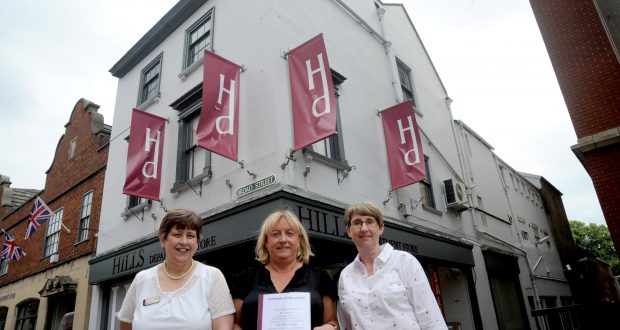 Two women who have worked for the same department store for a combined 84 years since they were teenagers have been given long service awards.

Karen Baker and Sue Berridge have worked for Hills in Spalding for 44 and 40 years respectively.

Karen joined the family firm straight from school and as well as working in every department at some point her role in the past included babysitting the likes of the company’s now director Katie Freeman.

“I’ve been brought up with family,” she said. “Everyone is so helpful here and the staff are nice and easy-going.

Sue, who lives in Quadring, joined on a youth training scheme aged 17 four years after Karen in 1979 and has spent the majority of her time in the school wear section.

“I see people coming in for uniforms now and I can remember fitting uniforms for their parents,” she said. “It’s a lovely place to work.”

Director Katie, said: “We’re a family business and I’ve grown up with them and they’ve been fantastic.

“They’ve seen a lot of changes and a new generation take over.

“It’s amazing in this day and age and we’re delighted to have such dedicated and loyal staff.”