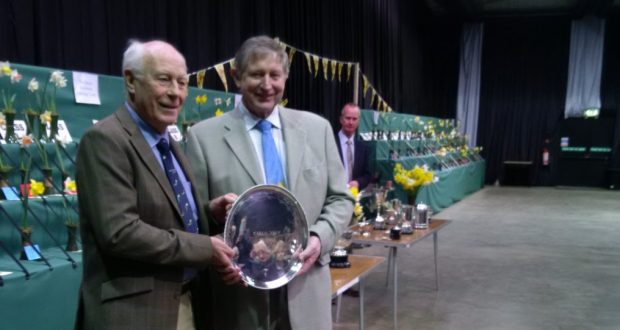 A local businessman is the latest winner of an annual award to recognise those who help the UK flower bulb industry bloom.

John Taylor has been awarded the Carlo Naef Trophy by the Springfields Horticultural Society trophy for his life-time career achievements in South Lincolnshire.

John is currently the commercial director with OA Taylor and Sons in Holbeach, a role he’s held since 1990.

He joined the company in 1985 and was initially responsible for the production and sales of all pre-packed bulbs.

Before that he spent 20 years with Geest Industries, beginning as a trainee bulb layer in 1965 and progressing to the commercial director role there.

He worked extensively with the NFU and was part of the South Holland Police Consultative Group as well as being a trustee of the Springfields Horticultural Society since 1992.

The award was presented by Peter Ruysen, chairman of Springfields Horticultural Society at the Lincolnshire Daffodil Society Spring Flower Show on April 14.

David Norton, the chief executive of Springfields Horticultural Society, said: “John has always been a dedicated supporter of the flower bulb industry and those who work within it, and it is therefore justly fitting that he should receive this recognition from the industry that he has supported all his life.

“It’s an award that his colleagues and associates would like him to accept as a sincere ‘thank you’ for his efforts on their behalf and as a sign of their appreciation of his considerable achievements.”