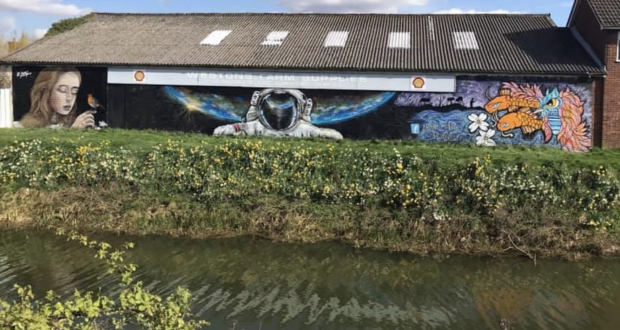 Adam Sadd, Karl Barfoot and Edgars Bokans have each created a display on the riverside wall of Westons Farm Supplies off Roman Bank.

The project follows up on the work they did earlier this year at Dead Man’s Drop off Mitchell Drive.

The trio spent most of Easter Sunday creating their artworks after asking permission from the owners.

Adam, who recently rediscovered his passion for the art, did the section on the right.

He said: “It was a group effort, we all rollered the wall over and got to work.

“I’m really happy with it and it’s being seen by so many people both walking and driving near it.

“For my part I wanted to do something inspired by the river. There are still a few gaps on there we’re looking to fill in with things such as swans.”

Karl had previously created an image of Captain Sir Tom Moore in the town and this time opted to create an image of a woman with a robin on her hand.

“I just thought it was an image that people would like,” he said. “It’s just something I came up with and she’s not based on anyone.

“I’m definitely proud of it. Portraits can be hard to do for a graffiti artist.

“I was umming and ahhing about it but I think it’s come out well and it’s definitely better than what was there before.”

Edgars created the spaceman in the centre of the mural with the Earth reflected in his visor. The name on the spacesuit is Eddy B, Edgars’s artist name.

“I had prepared a stencil, but in the end I just freestyled it,” he said. “I’m really pleased with it.”

The trio are now looking for other projects in the town.