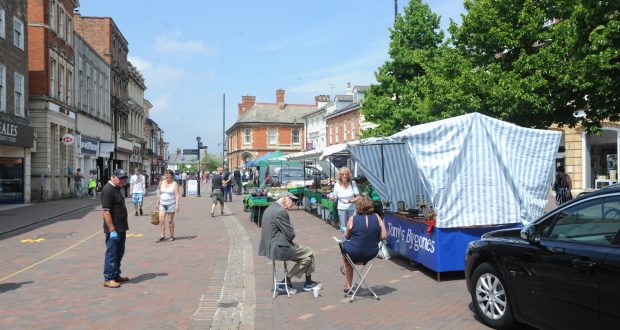 The market as pictured in June,

A councillor has said she’s “disgusted” and told others “they should be ashamed” after a bid by Spalding Market Traders to lower fees further than is being proposed.

But Spalding traders through Coun Angela Newton asked the council to consider lowering the fees even further so they pay the same as those at Holbeach and Long Sutton markets.

However on Tuesday all seven Conservative members of SHDC’s Policy Development Committee voted against having that as an option for the council to consider, defeating the six votes from independent councillors.

“This should not be a political matter. This is the future of our town. You should be ashamed of yourselves.”

The chair of the panel Coun Andrew Woolf, who had what turned out to be the deciding vote, said: “It’s a democratic vote.

“It took the democratic process and the outcome has just been heard.”

It works out at £1.40 per foot for regular customers while casual stalls will be charged at £1.90 per foot.

The proposal will also include slightly different fees to stand at Spalding Market on Tuesdays and Saturdays.

Coun Newton said traders should pay just 51p per foot as they do at Holbeach and Long Sutton markets as part of the given reasoning for removing stalls was because the council didn’t provide them at those markets. The traders also don’t want different prices for Tuesday and Saturdays, she said.

“I think it would be fair and equitable if we made all our market fees the same.”

She added: “The more stall holders we can get, the better our income’s going to be. We’ll take more from car parking and the shops will be busier. I think you can rate a town by how thriving the market is.”

Since the ease of lockdown SHDC hasn’t charged market traders, an arrangement that’s due to finish at the end of November.

Charlotte Paine, the council’s environmental service manager, said: “The proposals offer a significant reduction from the previous charges to Spalding.

“They do align with our other markets while taking into consideration conditions such as footfall, popularity of the markets as well as parking permits.”