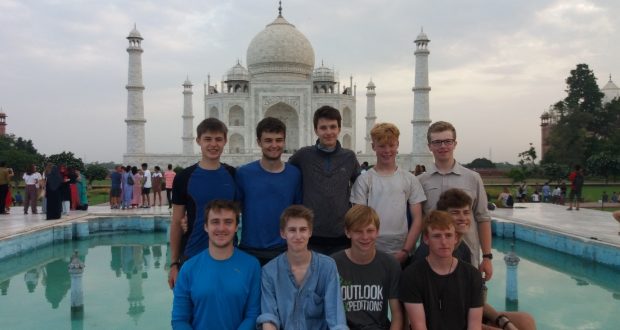 Landslides and dynamite made a group of Spalding school pupils’ month-long Indian adventure a blast for the budding Indiana Joneses.

Over the summer holidays, 21 Spalding Grammar School students embarked on the trip to northern India along with teachers and crew from Outlook Expeditions.

Teacher Stephen Lane said the trip was two years in the making and the money for the trip was raised by the students through a variety of initiatives.

At the end of July, the pupils, split into two groups, touched down in Delhi and sourced provisions for the first leg – a 14-hour couch journey north to Manali.

From there, the teams travelled 12 hours by Jeep along what Mr Lane called “one of the most incredible routes in the world”, crossing the Rohtang Pass and the Kunzun Pass, more than 4,500 meters above sea level, they made their way into the wild and remote Spiti valley, close to the Tibetan border.

With altitude now being a major factor, the groups acclimatised for three days in Kaza, where they worked on a project to construct greenhouses that would allow the local community to grow vegetables out of season. Mr Lane said: “The work was tough and involved mixing mud, making bricks in moulds and moving significant quantities of earth. The bricks were left to harden and teams then embarked on a six-day trek ascending up to an altitude of around 5,000m through some amazing scenery.”

On the trek, the group experienced homestays in remote villages as part of a sustainable tourism project.

When the group returned to Kaza, they plastered and painted the greenhouses. “It was with immense satisfaction that the greenhouse was completed and a plaque unveiled at an opening ceremony,” said Mr Lane.

A series of landslides, set off by heavy rain, delayed the pupils’ departure from the Spiti valley. After two days the road reopened but the journey was slow as the road was being repaired as they go, with dynamite blasts widening some sections.
Eventually the team returned to Delhi and from there went on to Agra for their final few days taking in a trip to the Taj Mahal.

Mr Lane: “After a wonderful 25 day experience it was time to return to Delhi and fly back to the UK. With students stepping up to lead the whole programme in country, making decisions about how to use the time, where to stay and how best to manage the budget it was great to witness how they developed over the course of the expedition.”