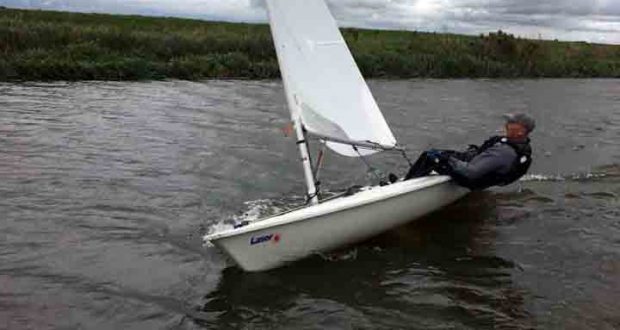 An in-form Andy Prior won all three races at Welland Yacht Club on Sunday.

Four boats took to the start of the day’s first race, which was number five in the Sunday Points series.

At first it looked like there would be little breeze to make progress against the faster than normal flow on the river.

As the start time got nearer, the breeze began to pick up with Prior and Mark Holland – both in full rig Lasers – getting the early lead from Gail and Katie Follington both in Laser Radials.

As the gusts came through, Prior managed to pull out a lead over Holland, followed by Follington duo Gail and Katie.

As the race progressed, the wind strength increased. But, by the start of the second lap, Prior had pulled out a considerable lead from Holland – with Gail Follington maintaining handicap difference in third ahead of Katie Follington, who was doing her best to keep her Radial upright.

The final results once handicaps were applied saw Prior place first from Gail Follington in second, with Holland third and Katie Follington fourth.

The afternoon would see races two and three of the Autumn Points series.

With the fleet now down to three boats, it was Katie who took the early lead from Gail Follington, followed by Prior.

The wind was constantly shifting throughout, with gusts making for a challenging race.

The positions would remain the same until they rounded the windward mark, where Prior took the lead and Gail Follington moved up to second.

These positions stayed the same throughout the second lap and, once handicaps were applied, Prior kept his lead from Gail Follington in second and Katie Follington in third.

For the final race of the day, the wind had appeared to drop away completely and the race reduced to a single lap.

The final result again saw Prior claim first place from Gail Follington in second and Katie Follington back in third.