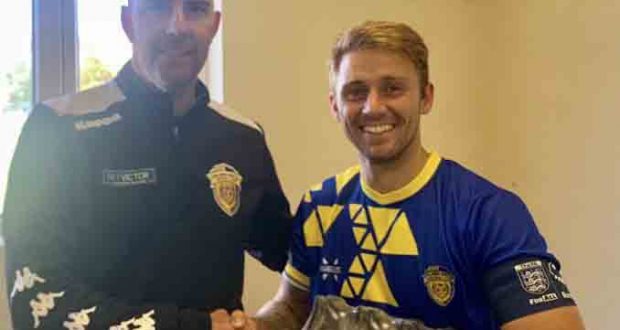 Striker Joel Brownhill bagged a hat-trick in a tremendous team performance by Spalding United as they won 3-1 at Stocksbridge Park Steels on Saturday.

Brownhill netted on 22, 48 (penalty) and 80 minutes at the Look Local Stadium to hand Steels their first defeat of the BetVictor NPL South East Division season.

Over the years Stocksbridge has never been a happy hunting ground for the Tulips, but Matt Easton’s injury-ravaged squad supplied the goods with some style on this occasion to secure maximum points.

The victory moved Spalding’s total to ten points so far this season (they achieved only 31 in total last season) and saw them climb into eighth position ahead of Tuesday’s fixtures.

Brownhill, brother of club captain Lewis, provided the spark which has been missing in the front line of attack so far this season.

There were signs of his leadership skills at Ilkeston a few days earlier and they were continued in Sheffield over the weekend, showing his ability to strike the ball with some power and direction with either foot.

The first of his three successful strikes came in the 22nd minute and he added to his tally three minutes into the second half from the penalty spot.

Steels reduced the arrears on 72 minutes thanks to Luke Mangham’s penalty after James Hugo had been harshly penalised by the new handball ruling.

Also starring for the Tulips was Neal Spafford, who was immense in the heart of defence – quelling numerous Steels attacks with his usual efficiency, leading the back four line-up which looked solid as a unit throughout.

On the occasions that Steels threatened, they were denied by the goalkeeping skills of Michael Duggan.

From the outset the Tulips showed their intent with quick movement from back to front. After just four minutes a break emerged down the right side with Joel Brownhill pinging the ball over for Scott Floyd who forced a good save from keeper Jacob Carney.

Within minutes Joel Brownhill forced the keeper into another save following a neat passing sequence.

At the other end, Ben Richards reacted swiftly to deny the lurking Ross Goodwin at the expense of a corner.

For once Duggan failed to collect the ball as it sailed over his area, but Scott Ruthven scuttled the ball into the side netting at the far post.

Mid-way through the half Taron Hare started the right side movement which led to Joel Brownhill , in space, extending the Tulips’ lead via a goal post.

The Tulips extended their lead three minutes into the second half. George Zuerner was upended in the area and Brownhill stepped up to slot in the resulting penalty, sending keeper Carney the wrong way.

The entertainment level was high for spectators as the play flowed from end to end with Ben Greenwood, Kegan Everington, Zuerner, Scott Floyd and Lewis Brownhill working the midfield well for the Tulips.

Steels were back in the hunt in the 72nd minute, with Luke Mangham beating Duggan from the penalty spot following Hugo’s unfortunate handball offence. But the Tulips two-goal advantage was restored ten minutes from time.

Everington’s corner kick was helped on by Richards leaving Joel Brownhill to gleefully complete the scoring with his hat-trick goal.

Spalding host Cleethorpes Town in their next league game on Tuesday night (7.45pm).